Just in time for D.C. Beer Week, Brookland Pint opens its doors in the Monroe Street Market development in Brookland today. The timing, however, is purely coincidental: “I was trying to get open months ago,” says owner John Andrade. The restaurant will have a lot of similarities to its sister establishment, Meridian Pint, in Columbia Heights: all American craft beers, a vegan- and vegetarian-friendly menu, and an emphasis on all things local and environmentally friendly. In fact, many of the staff and management of Meridian Pint are now at Brookland Pint.

The bar has 24 beers on tap plus some large-format bottles. Look out for “No Sleep ‘Til Brookland,” a dry-hopped IPA brewed exclusively for Brookland Pint by Franklins brewery in Hyattsville. While you can expect various beer events at Brookland Pint, Andrade says it likely won’t be as much of a beer-nerd destination as Meridian Pint. “I don’t think anybody does it as well as Meridian Pint, and I don’t aspire to try to compete with that,” he says. (Because Brookland Pint is just opening, there will be no D.C. Beer Week-specific events there this week.)

Chef and Brookland resident Rebecca Hassell is carrying over burgers and quesadillas from Meridian Pint, but you’ll also find dishes like kashmini curry, Puerto Rican mofongo, and fish and chips. Lunch and brunch will begin Sept. 1.

One of the best perches in the restaurant is along the huge open windows where bar stools straddle a counter between the indoors and outdoor patio. The bar area has two long community tables made with wood beams from a southern Maryland tobacco farm, plus USB ports and outlets along the bar itself. The marble on the back bar and around the beer cooler come from a quarry in Vermont that also supplied marble to the Jefferson and Lincoln memorials. Turn the corner, and you’ll find two-tops and booths plus a banquet room in the back that can seat an additional 30 people.

Andrade also believes that restrooms are one of the most important of the restaurant aesthetically. If they’re dirty, he says, it tells diners that those same (lack of) standards are applied to the rest of the restaurant. “This is probably one of the most hands on environments in a restaurant and often the most overlooked,” he says. At Brookland Pint, all the stalls are unisex, but men and women share the same hand-washing area. And if Andrade has his way, they better be clean.

Check out more photos and the menus below.

The private dining room called the Juniper Room. The tables are made from a Virginia Juniper tree that fell on Utah St. NW during the 2012 derecho. 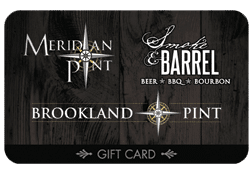